The ressources below can be downloaded and used for press purposes 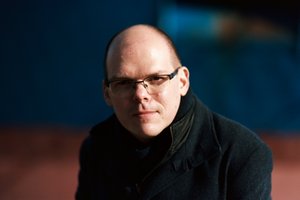 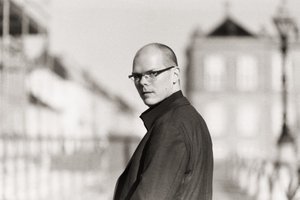 Interview in The Australian with James Crabb

The last time James Crabb busked was 37 years ago. Dressed in his kilt, the bigger-than-average 12-year-old was playing television themes and disco hits to raise funds for the Church of Scotland in Dundee. His instrument: a shiny red piano accordion he had pestered his parents to buy for his fourth birthday. In a corner of Britain synonymous with bagpipes, the only son of James and Violet Crabb gave his first public accordion performance aged five, won an under-12 competition when he was six, and became the go-to accordionist for ceilidhs.

Young Crabb’s instrument — an Alfa 48 Bass — was a mongrel of the aerophone clan. After its 1829 patenting in Vienna, the piano accordion was everywhere and its rudimentary ancestor, the Chinese sheng, all but forgotten, together with its many cousins including the harmonium, melodeon and concertina. The bag of air with its clustered buttons and truncated keyboard pumped out the people’s music, inside the tavern and out on the street. While the Soviets used accordions for propaganda, not everyone was so enamoured of the squeeze box. Edvard Grieg thought they sounded like a pig with a sore throat, the Nazis tried to halt their production, and for a time they were banned inside the Catholic Church.

But their extended family’s latest offspring, fathered by the respected Russian bayan, has been entrusted with Western music’s hallowed classical canon. Equipped with more than 200 buttons on both sides of its bellows and with no keyboard in sight, the aristocrat of the family is the classical accordion. Its pre- eminent virtuoso on the world stage is the boy with the shiny red Alfa — all grown up at 49, bold and bald.

“There is an extraordinary intensity in a Crabb performance,” says renowned conductor Martyn Brabbins. “[He] is a deep-thinking virtuoso musician ... who has been a transformative influence in bringing the classical accordion more into the mainstream of classical music.”

Crabb demonstrates the newest voice in the classical world to a mobile audience more familiar with a squeeze-boxed Waltzing Matilda than Grieg’s Holberg Suite. Will the unorthodox marriage between accordion and classical gravitas warrant more than an occasional glance?

Crabb’s repertoire spans five centuries: from the Renaissance and baroque periods (arranged by him for the accordion because “they are more transparent than the romantic style of Chopin or Beethoven”) to pieces written for the classical accordion by Kalevi Aho, Bent Sorensen and Kasper Rofelt — a new generation modernising the tradition of bayan composers.

Accordions, their innards and their sounds, have been part of Crabb’s life since he was born. His father repaired them and, more significantly, played them. When Crabb Sr squeezed, “wee Jimmy” was quick to pick up a riff. And once he heard it, he could play it. He has perfect pitch. Shortly after he was crowned British under-16 champion, Crabb’s accordion teacher died. His replacement, an Italian ice-cream vendor in Dundee, introduced Crabb to an all-button model — a cross between the conventional instrument he had been using and the one he plays today. “That opened up a new world of music for me,” Crabb says. Its scholastic capital, however, was in Denmark, not Scotland. About 12 years earlier, Mogens Ellegaard, the leading pioneer of the classical accordion, had convinced the Royal Danish Academy of Music in Copenhagen to endow the instrument with its own faculty. Ellegaard became Crabb’s teacher (“he was like a god to me”) and the Scot remained in Denmark for 25 years.

At the academy, Crabb befriended a Norwegian who shared not only his birth year but also his passion for the instrument. Geir Draugsvoll and Crabb studied and performed together, and when Ellegaard died suddenly in 1995, both assumed his professorial duties. While rummaging through some old library music discarded by the academy, the duo found a two-piano score of Stravinsky’s fairytale ballet Petrushka, and decided to transcribe it for two accordions.

“[James] was the driving force,” insists Draugsvoll. “He did great, great work there.” “We both loved the music,” says Crabb in response. “The Russian melodies and their orchestral colours suited our accordions.” A recording followed (coupled with Mussorgsky’s Pictures at an Exhibition), and critics everywhere took note: “Crabb and Draugsvoll have you on the edge of your

 armchair with their dash and virtuosity ... compelling you to re-evaluate the instrument’s capacity as a serious concert medium,” wrote The Sunday Times. “[It] will help upgrade the accordion from campfire to the concert hall” echoed The Independent.

With its accordion faculty established, the Copenhagen academy schooled a new breed of composers keen to write for an instrument once considered unworthy. Rofelt — now a leading Danish composer — studied composition at the time Crabb and Draugsvoll were teaching accordion. He relishes writing for an instrument whose versatility allows him to “create very subtle effects” in his compositions, an instrument whose tonal range is greater than a concert grand’s. “On the piano,” says Rofelt, “if you’re lucky and have a big hand you can play 10 notes. But on the accordion you can actually span up to two, maybe three, octaves with one hand.”

During the past 12 months, Crabb has been collaborating with Brett Dean, the Berlin-based Australian composer. “I do love the very particular haunting sound that the accordion can provide,” Dean says. “It’s the most wonderful combination of wind and string instruments.” Dean is writing Hamlet, his second opera, for next year’s Glyndebourne Festival and he chose Crabb to play a major role not only in the pit, but on the stage as well.

For Hamlet’s famous play-within-a-play, Dean augmented the group of players with a travelling musician. “And one of the most transportable street instruments is the accordion,” he says. “[James] is really the leading figure of the play itself, [which] is presented as a mime. He’s providing pretty much all the music in that time. So it’s very much James’s show.”

Although Crabb reckons Dean’s music is “incredibly demanding ... but it’s really worth the effort musically”. Then there’s the acting. “Strong man that he is,” Dean says of Crabb, “he still has to make sure that he has the body strength to not only carry his accordion, which is a large instrument, but also move around.” Rehearsals start in April and after Glyndebourne finishes in July, Hamlet will tour Britain. It’s a long time to be away from home.

Home is Sydney. In 2010, Crabb — Scottish national, Danish resident — settled in the emerald city with his pregnant Australian wife and their two-year-old son. Crabb’s first venture down under 17 years earlier had been underwritten by Queensland’s Goss government extravaganza, the 1993 Brisbane Biennial. Appearances with state orchestras followed then in May 2000, while performing

 in Copenhagen, Crabb received an urgent call from the Sydney Symphony Orchestra: could he play Luciano Berio’s 13th Sequenza, and could he come to Sydney for a one-night stand at the new City Recital Hall? He had two weeks to prepare and memorise a demanding eight-minute solo.

In the audience for the rare performance of Berio’s 13 pieces for instruments and voice was Lizzie Jones, a blonde violinist from the Australian Chamber Orchestra. There to see the 5th Sequenza (for trombone), Jones had left before a jet-lagged Crabb took the stage. “They flew me in that morning, I played that evening, and they flew me back the next day.” He arrived in Copenhagen carrying a didgeridoo. “I had to bring something home to prove I’d been here.”

What the ACO’s violinist missed in Sydney — Crabb’s formidable musicianship — the orchestra’s musical administrator had seen in Suffolk. Meurig Bowen was so impressed by Crabb’s performance at the 1998 Aldeburgh Festival, he set about persuading the ACO to engage him for one of its tours. Not everyone was enthused. “We were like, ‘As if we’d have an accordionist!’ ” says Jones. But Bo​- wen prevailed, and two years after his one-night stand with Berio, Crabb was back in Sydney, this time with his Danish girlfriend, to tango with the ACO. Jones recalls the first rehearsal: “Richard [Tognetti] had been practising with James and he was really impressed. And he said to me: ‘Lizzie, he’s the loveliest guy you’ll ever meet.’ ”

On the road with Piazzolla, Crabb and Jones became close friends, and when, later that year, Crabb returned on his own to perform at ACO’s Huntingdon Festival, romance blossomed. Accordionist married violinist in 2005, and is now eligible to become an Australian citizen. “Australia is like paradise, really,” he says. But being based here does have its drawbacks, not least having to travel to Bulgaria to have his $50,000 instrument tuned.

“Has James told you about his other passion?” asks Jones, now a violinist with the SSO. Perhaps it’s the soloist’s isolation, the practice routine — just man and instrument — that accounts for Crabb’s hockey mania. He represented Scotland in the sport at the 2009 Masters World Cup in Hong Kong. “I met a lot of my current teammates there,” he says, explaining how he came to play open grade for the University of Sydney. Furthermore, he plays with local club Masters, coaches his son’s under-11 team, and umpires junior and senior games.

Back at Circular Quay, Crabb’s busking time is nearly up. Few have stopped to listen. Most dawdle or scurry past, oblivious to a performance others would pay a

tidy sum to hear. Throughout the hour, however, one figure has stood nearby, transfixed by Bach, Grieg, Rameau and Piazzolla. He approaches Crabb. “Awesome, just awesome!” he says. Brazilian musician Diago Maia, 30, is in his sixth year busking his way around the world. Crabb offers an encore — a tango of course. “I was going to busk here,” Maia says later, “but when I heard him I thought, ‘no way, I have to listen’. This is the best I’ve heard. Simply awesome.” Maia should know. He too plays an accordion.

Crabb’s Australian commitments on and off-stage are multiplying. He has signed a long-term contract as artistic director of the Four Winds Festival in Bermagui on the NSW south coast, and late next year, after Hamlet, he will curate a 24-hour “mini immersive experience” at the UKARIA Cultural Centre outside Adelaide. And before the year ends, there will be a return to Huntingdon, now under the auspices of Musica Viva. Of the nine works Crabb will perform, five are by Scandinavian composers, underscoring the impact of Ellegaard. One of those, Light Falling, was written for accordion and cello by Rofelt.

Crabb also plays piano and organ, but bristles at the suggestion his musical talents are wasted on the accordion. “That’s my instrument,” he declares, pointing at Black Beauty. “That’s where I feel I can say what I want to say.” Brabbins agrees: “[He has] a passionate connection to the music he’s playing.” Dean adds, “James is not only a compelling soloist and beguiling character, but also really a musician’s musician. He’s really the player, in my opinion.”

As he approaches his 51st year, how long does he plan to keep playing? “So long as my lungs and arms are working,” Crabb says, smiling, “the bellows will keep pumping.”

James Crabb will perform at the Huntington Estate Music Festival, Mudgee, NSW, from November 23 to 27.

"The same goes for Kasper Rofelt (b. 1982) at the concert Monday evening. The music stands much better on its own by being called "Apsaras' Music" without the interference of information about whether it's a spirit of the clouds or the water. This percussion piece was in fact ingeniously composed by Rofelt, captivating right from the start and performed skilfully by Mads Hebsgaard Andersen."